This winter it became perfectly clear that the mankind’s effort to solve the global warming crisis is a mission accomplished.  Now is the time, and Infrafloor is the company, leading the way to winning the war against global cooling with energy-efficient radiant floor warming.

Never was it more evident that the mission against global warming was fait accompli than when the December 2013 Australasian Antarctic Expedition of global warming scientists verified the existence of abundant levels of ice in Antarctica.  The enduring photo of the two-ton, ice-strengthened ship, the Akademik Shokalskiy, stuck in the Antarctic ice, demonstrated global warming’s retreat as convincingly as the adventuresome polar bear, cruising adrift a tip of the iceberg, alerted millions to its inconvenience. 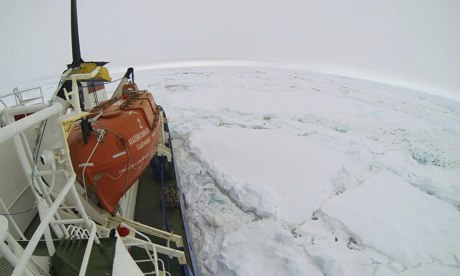 With the global warming bump-in-the-road behind us, now is the time to move forward to the real crisis plaguing humanity.  Global cooling’s debilitating effects have been felt across America during this winter’s record low temperatures and high snowfalls.  The absolute truth is that there’s nothing that can be done about the weather, but there is something that can be done to defeat global cooling and keep warm, comfortable, healthy and in good spirits.

Don’t neglect the feet.  One of the primary ways to keeping warm, comfortable and healthy is keeping the feet warm.  There is no better way to keep the feet and the whole body warm than with Infrafloor’s electric radiant floor warming.  Radiant floor heat does not rise to the ceiling like conventional convection heat.  Infrafloor’s in-floor warming is attracted to people and objects and is therefore concentrated from floor to head level.  There’s no better way to regain real estate lost to global cooling that with a Infrafloor floor warming counter-offensive.  Infrafloor’s electric floor heating systems are easily deployed in individual rooms as well as throughout the whole home or office, in remodels as well as new construction.

Speaking about Infrafloor’s energy efficient electric radiant floor warming systems coupled with the latest energy-saving programmable floor thermostats, Infrafloor’s President and CEO, Eric Kochman stated, “Together we can [make the world warmer].   We are definitely in the right place at the right time to solve global cooling. Infrafloor’s mission is to warm the world through education, dedication and floor heat installation.”